Fort Capital Management is a privately owned real estate investment management company based in Miami, Florida led by developer and entrepreneur Nadim Ashi. Through its managed funds, the company invests primarily in the South Florida and Caribbean markets, with a focus on highly differentiated properties that possess singular attributes and unique provenance. Managing partner Ashi and his executive team have decades of successfully honed real estate and investment experience with a risk-management focus. Fort Capital’s stakeholders are leading private investors and family offices from the US, Europe and South America.

Around the globe, the Four Seasons name epitomizes luxury, offering a lifestyle with personalized 24-hour care in surroundings of unmatched style and quality. Since the opening of its first hotel in 1961, Four Seasons Hotels and Resorts has followed a path of innovation, expansion and dedication to exceptional quality. Now managing over 90 hotels in 36 countries, the Canadian-based company is distinguished by the hospitality industry’s highest standard of service, delivered with friendliness and reliable efficiency. With over 30 years of residential experience, Four Seasons is an expert in property management – dedicated to maintaining long-term value and meeting the needs of the world’s most discerning residential clientele. Owners of Four Seasons Private Residences enjoy superlative standards in service and property management – at an address with international recognition and global stature.

RMP is led by Richard Meier and five partners and sustains an international practice with offices in New York and Los Angeles. Since establishing his office in 1963, Richard Meier’s work has encompassed major cultural and civic commissions as well as private residences and corporate and academic facilities. He has received the highest honors in the field including the Pritzker Prize for Architecture, the Gold Medals of the American Institute of Architects and the Royal Institute of British Architects as well as the Premium Imperiale from the Japan Art Association. Richard Meier is best known for the Getty Center in Los Angeles, the Barcelona Museum of Contemporary Art, and the Jubilee Church in Rome. His current work includes a condominium complex in Jesolo, Italy, a residential tower in Tel Aviv, Israel, two residential towers in Tokyo, Japan; two hospitality and commercial projects in Mexico, three residential projects in Taiwan, one hospitality project in South Korea, and private residences in Europe, Asia and North America.

For more than two decades, Kobi Karp Architecture and Interior Design (KKAID) has been providing creative and innovative design solutions to renowned clients in the hospitality, retail and high-rise residential development community. KKAID’s clientele includes Hyatt, Hilton, Starwood, Club Med, Wyndham, The Related Group, Leviev Boymelgreen and Forest City Enterprises, among many others. To date, KKAID has participated in the completion of more than $10 billion in commercial, residential and mixed-use properties.

Lee Mindel is a principal in Shelton, Mindel & Associates, an architectural firm providing complete architectural, interiors and product design services. The firm is the recipient of twenty-eight AIA awards for interior architecture, seven Interior Design magazine Best of Year awards for residential and commercial interiors; fourteen design awards from the Society of American Registered Architects, a Progressive Architecture citation, three Roscoe awards for product design, as well as three Good Design Awards and two American Architecture Awards from The Chicago Athenaeum. Product design lines include collections for Knoll, Waterworks, Jack Lenor Larsen, V’Soske and Nessen Lighting. Architectural Digest has recognized SMA as one of the top 100 design firms of the last century. In 2005, Mr. Mindel was recognized as the Deans of American Design, and has also been inducted into the Interior Design Hall of Fame. He received his Master of Architecture from Harvard University in 1976 after obtaining his Bachelor of Arts, Cum Laude, with Distinction in Architecture, at the University of Pennsylvania.

Paris-based Joseph Dirand is an award winning architect and interior designer known for a unique ability to infuse light and space into his projects. His commissions include private residences, hotels and a broad array of fashion houses and designers, including Chloe, Pucci, Balmain, Rick Owens and Alexander Wang. His work is defined by his passion for light, proportion and order, and frequently incorporates pieces that feature an interplay between curvilinear, feminine shapes, and rigorous, unyielding materials like marble and granite. Mr. Dirand has been featured in French Vogue, Le Figaro, Financial Times, Wallpaper and AD Collector. In 2010 Dirand won the prestigious Wallpaper* Best New Hotel Award for Habitat Monterrey.

The NEW Surf Club Condominium & Hotel Resort in Surfside, Miami Beach officially broken ground in March 2014, for the restoration and renovations of the original historic oceanfront Surfside Surf Club property with the addition of 2 luxury oceanfront condominium towers and a luxury hotel managed by the Four Seasons.

The historic and iconic Miami Beach Surf Club in Surfside was built in 1929 and designed by archtect Russell Pancoast. This previously private club sits on 6 acres on the ocean side with 815 feet of oceanfront and just under 3 acres on the west side of Collins Ave. Over the last 80+ years, the membership and visitors to the Surf Club in Surfside, Miami Beach is a long list of who’s who of the elite and many world famous figures.

As the original Miami Beach Surf Club has long been designated as a historic landmark, the additional development on the property will incorporate the original building with it’s planned restoration and renovation, returning the existing Surf Club to it’s original splendor. The newly restored club will also be upgraded with many new luxury features and amenities. As Surfside also has a strict 12-story height limit, the additional condominium towers and condo / hotel property will not tower over the existing property (as many other oceanfront hi-rises outside of Surfside can), but are designed to keep the original Surf Club as the center focal point for the new development.

The change to the site is still dramatic, with three 12-story glass towers flanking the restored 1929 Russell Pancoast-designed club on either side. Current developer diagrams of the lot shows 3 new towers – two 12-story sweeping oceanfront towers to the north and south of the original Surf Club offering luxury condominium residences and select penthouse homes only. These 2 condominium towers will be home to just 150 residences. Each Surf Club condominium tower will feature it’s own gym and spa, residents only pool and much more…

A third smaller Four Seasons Surf Club hotel only tower in the center of the oceanfront property will be home to an 80 unit luxury hotel managed and serviced by the Four Seasons.. The original Surf Club building, situated in the center of the property has been planned (pending) to also include a number of newly designed ultra-luxury hotel units. The Surf Club’s remaining 2 acres across the street on the west side of Collins Ave. will feature an additional parking structure and new retail spaces bringing great shopping and specialty shops mere steps from the Surf Club residents homes.

With almost fifty unique floor plan configurations within the 150 condominium residences and penthouse homes at The Surf Club condominium residences. All considerations have been taken into account with the residences being meticulously designed to anticipate the needs of virtually any lifestyle. Ranging in size from 1,200 square feet to 8,000 square feet, with floor-to-ceiling glass “walls” and up to 20-foot ceiling heights, The Surf Club residences also feature expansive balconies up to 12-foot deep that create outdoor living rooms separated from the interior spaces by the broad floor-to ceiling sliding glass doors.

The center oceanfront Four Seasons Surf Club tower will feature a five-star condominium hotel and spa, managed by the Four Seasons. The hotel section will also feature a specialty food store, a new cabana section – similar to the original curving cabana section of the original Surf Club – which will be built in front of the southern tower. At least three oceanfront pools are featured on and around the club’s ocean frontage, with two of those pools for the exclusive use of the residents. A number of long lawns provide beautiful ocean view vistas through the highly landscaped grounds and recreated sand dunes. Two large driveways will lead to each of the twin oceanfront towers, with the Surf Club’s original arrival drive still at the center of the property.

A few of the Surf Club SIGNATURE PENTHOUSE details include:

Since its creation as a private social club in 1930, The Surf Club has played an important role in the cultural history of Miami Beach as a nexus for the most exceptional personalities of the era, from scions of industrial fortunes to the Duke and Duchess of Windsor, Winston Churchill, Frank Sinatra and Elizabeth Taylor. The original club’s historical landmark structure, a Russell Pancoast-designed Mediterranean villa replete with ballrooms, bathing cabanas and the legendary Peacock Alley loggia, will be preserved within Meier’s new architectural design. 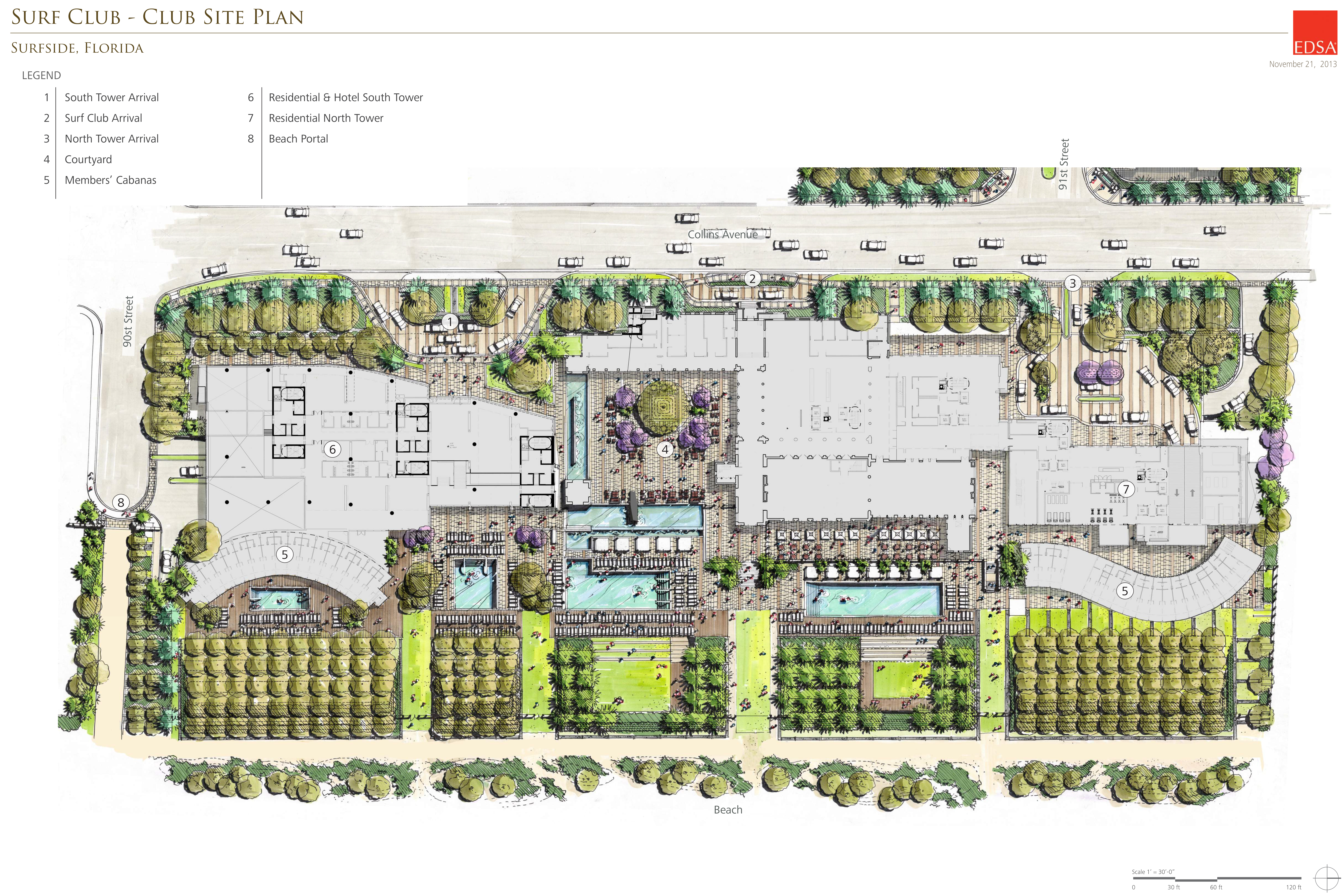 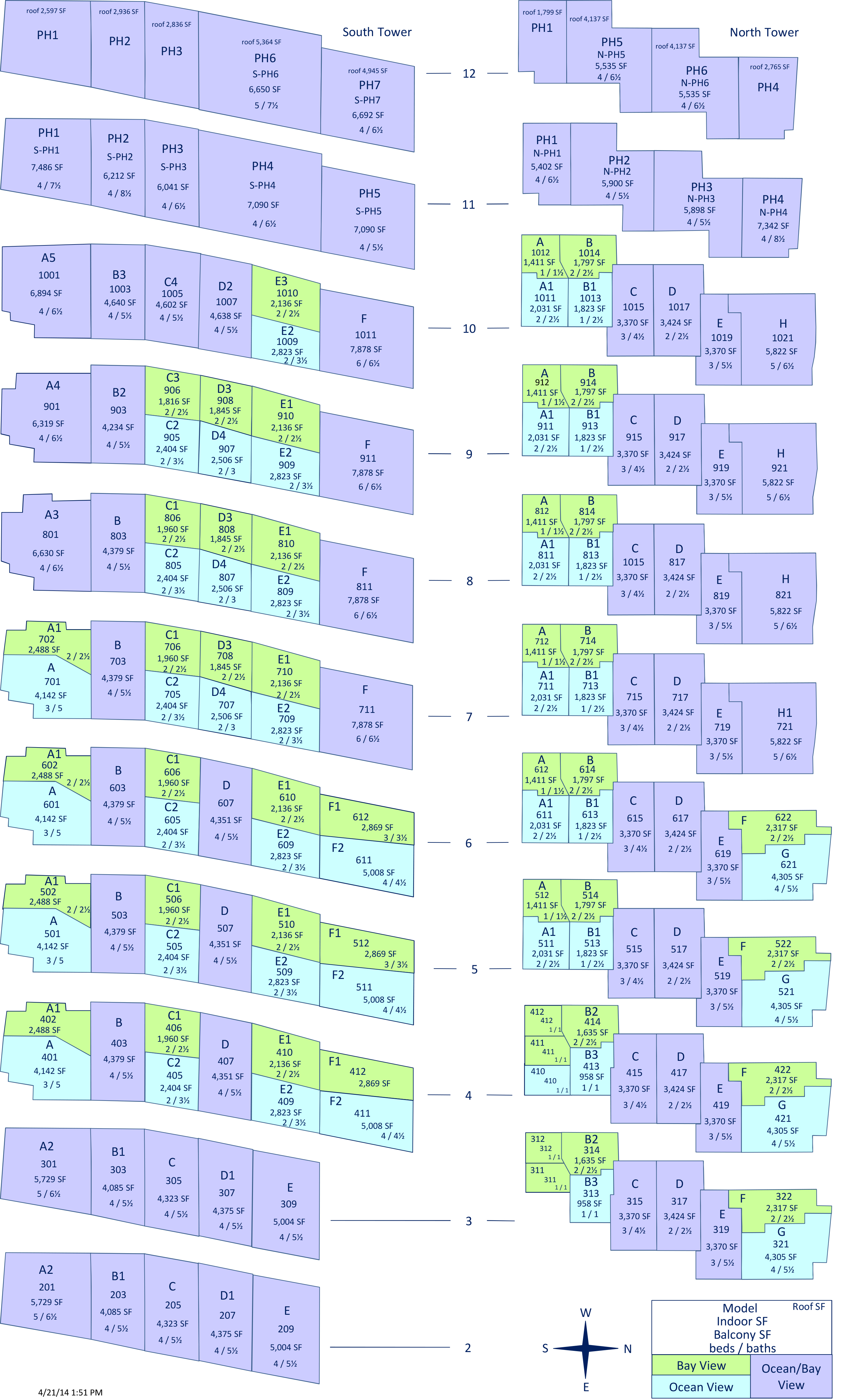