Miami is getting a 66-story Aston Martin tower with residences at the mouth of the Miami River.

Argentina’s Coto family revealed the name of the condo project today, which is planned at 300 Biscayne Boulevard Way. It is the first of several planned projects that the family plans under the G and G Business Developments name.

Pricing will exceed $1,000 per square foot, with the 390 units starting at around $2 million. Those prices will befit what the Cotos paid for the one-acre property – $125 million, the most expensive acre ever sold in Miami.

Sales will begin in November. A sales center will open in March, with groundbreaking in Summer 2017. Completion is scheduled for 2021.

First came Porsche. Then Armani, Fendi and Missoni. Now Aston Martin is the latest luxury brand to gun for a piece of South Florida’s condo market.

The British car maker — known for giving James Bond his wheels since Goldfinger —announced Wednesday that it will partner with wealthy Argentine developers on a 66-story condo tower called the Aston Martin Residences at the mouth of the Miami River in downtown Miami. The licensing deal marks the auto company’s first venture into real estate. A team from Aston Martin will design the building’s common areas and amenities, including lobbies, fitness centers and a spa.

“It’s not a brand-slapping exercise,” said Katia Bassi, a vice president at Aston Martin. The company wants to make its mark “in all the

[cities] where it’s important to be, and Miami is one of those,” she said.

A strong dollar and weak global economy have starved the region of foreign buyers.

But Argentina’s Coto family, which paid a record $125 million two years ago for the vacant waterfront land next to the Epic Hotel, says it has enough horsepower to get the 390-unit project going.

Three factors will work in the tower’s favor, developer German Coto said at a press conference: A brand name with global appeal. A coveted location where the Miami River meets Biscayne Bay. And the Cotos themselves, who have pockets so deep they say they can afford to build the high rise without a construction loan.

Renderings show a soaring, sail-shaped structure, necessitated by the long and narrow site on the Miami River’s north bank. Pricing hasn’t been set but will be competitive with the most expensive downtown condos, Coto said. That means at least $1,000 per square foot. Architects Luis Revuelta of Miami and Bodas-Miani-Anger of Argentina will design the project 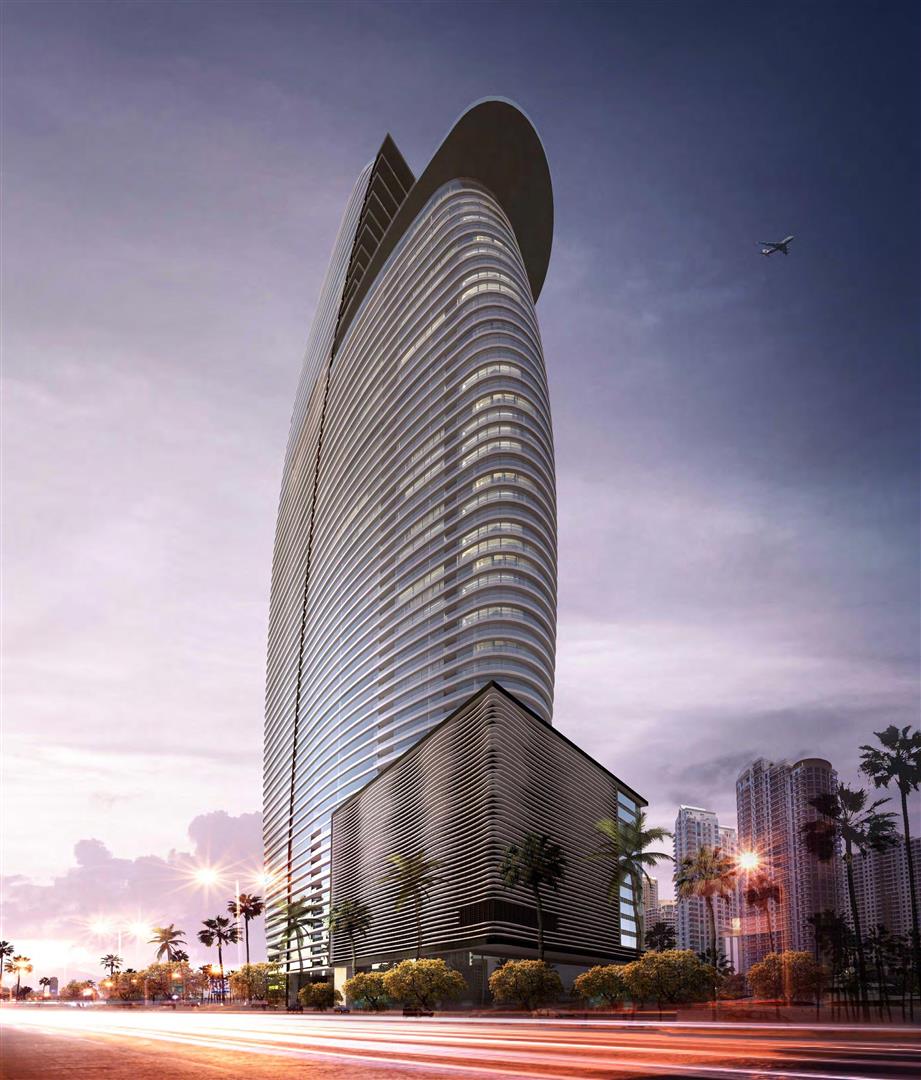 “The market is in great turmoil right now,” said Jack McCabe, a South Florida real estate analyst. “Many countries that have been feeder markets for South Florida are in recession, especially in Latin America. The developers are starting a sales campaign at a very difficult time for global economies.”

The Cotos plan to launch official sales in March and break ground over the summer. That’s similar to the timeline sought by another developer new to Miami real estate, Vladislav Doronin. The Russian billionaire is already selling pre-construction condos in Edgewater and has plans for projects in Brickell, too.

But the Argentine group says it will move at its own schedule, with a completion date for the massive tower set in 2021, when the financial climate may have improved.

And McCabe said Aston Martin’s brand, as well as a prime location, will help the project stand out in a crowded market.

“Developers are looking at the success stories in the market, one of which has been branding with luxury designers,” he said.

Boom on the river

The Miami River, once an industrial waterway popular with drug runners, is now teeming with development. New condo and restaurant projects are going up on both banks. Developers eager for waterfront land have been snatching up properties.

When the Cotos and a group of investors bought the small site (it takes up just three-quarters of an acre) at such a high price in 2014, the deal made national news. It is still believed to be the highest price paid per square foot for undeveloped land in South Florida. And it was paid for in cash.

The family, one of Argentina’s wealthiest, owes its fortune to a national chain of supermarkets in Argentina. Coto Supermercado says it has annual sales of roughly $3 billion and employs 25,000 workers. It is also developing mixed-use residential and commercial projects around new supermarkets.

The chain is so well-known that former President Néstor Kirchner once criticized founder Alfredo Coto for its high prices. (The family generally stays out of politics.)

The Cotos’ ability to finance the project using only their own capital and buyer deposits could prove crucial. Banks and private lenders are shying away from South Florida real estate projects as the luxury market tumbles.

But one risk to the self-financing model is escalating costs. Other developers have said they planned to finance their own projects but didn’t account for skyrocketing labor and material costs, McCabe said. They ended up having to seek loans.

That capital may not be available if the market stays soft.

In mainland Miami, average sales prices for luxury condos plummeted 29 percent year-over-year in the third quarter of 2016, according to a report from brokerage Douglas Elliman. The number of luxury condo sales fell by a quarter. And units languished on the market for an average of 129 days, compared to 52 days last year.

Banks and other lenders have taken note.

“There’s been a slowdown in construction financing, not just in Miami, but in other major markets,” said Jonathan Miller, a housing analyst who authored the report. “This has been a four- or five-year development boom that’s occurred across the United States. I think some lenders are realizing that and taking a breath.”

The competition from Aston Martin may also prove unwelcome news for the developers of One River Point, which is on the Miami River but further west.

The Cotos are following a tried-and-true model in recruiting a well-regarded luxury brand to provide design credibility and headlines.

Developers are building Porsche Design Tower and Residences by Armani/Casa in Sunny Isles Beach. Another team is developing Fendi Chateau Residences in Surfside. Doronin has enlisted the Italian fashion house of Missoni for his Edgewater tower. Two projects branded by Ritz-Carlton are also underway. And six Donald Trump-branded properties helped jump-start development in Sunny Isles before the housing bubble burst.

For Aston Martin, which is also designing yachts and, potentially, private planes, the Miami project may serve as a test drive. The company wants to work with developers in other real estate markets, too.

“If it’s an iconic place, with an iconic partner, with a brilliant architect, in the right location, why not?” said Marek Reichman, chief creative officer at Aston Martin.

But don’t expect automobile-inspired amenities like car elevators and sky garages, which have helped market the Porsche project.

“Too obvious,” Reichman said. “It’s about high design. … We’re seeing a demand for our customers to have more than just the car. ”

When built, the Aston Martin project will also connect a gap in Miami’s Riverwalk. The vacant site hasn’t been linked up to the city’s growing public walking trail.

As part of an agreement with the Miami River Commission, which unanimously approved the project in April, the developers will build the riverwalk at 24 feet wide.

“It’s a grand building, the kind you’ll see on postcards,” said Horacio Stuart Aguirre, the river commission’s chairman. “And it does not detract from the enjoyment of the waterfront by regular people.”